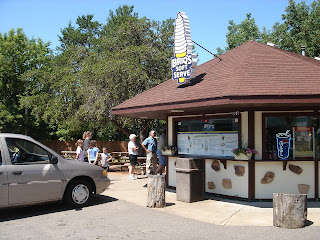 Visits to the A&W Drive In were always a treat. Those heavy chilled mugs with frothy root beer more than compensated for the mediocre burgers. A scoop of vanilla ice cream added to the suds was transcendent. Both were changed in delightful ways: the root beer lost some of its heavy sweetness and the ice cream grew a crunchy crust.

I don't know if A&W still uses glass mugs. I was about to find out when I ran across Briq's Soft Serve on the north side of Wausau, Wisconsin. Classic walk up joint with picnic tables under shade trees. Since I was already primed for a root beer float, I ordered one at Briq's. Apparently the creator of the Briq's version had a passing familiarity with icebergs: the vast majority of the Briq's soft serve ice cream lurked below the surface. No surprise coming from a place which is the "home of the one pound ice cream cone." I ordered a small and it was enough for a small family. 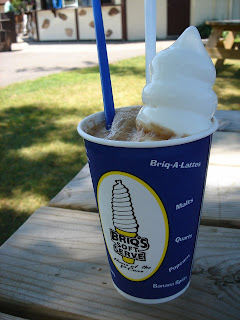 At some point, I will investigate the use of glass mugs at A&W, but only if I don't pass an independent drive in on the way.

Briq's is located just off US 51 on Merrill Road in the general direction of the A&W.
Posted by Atworth at 1:20 PM