A Penny and Pieces of Eight 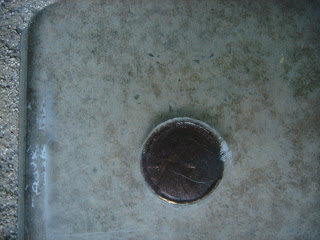 There was a party at the Earnest Hemingway house in Key West last night. The chance of rain was nil but there was a tent anyhow. I suspect the same reasoning that went into that decision was also present when Mrs. Pauline Hemingway replaced all the ceiling fans in the house with chandeliers. An elegant flourish perhaps, but out of touch. The band was damned good.

The tour Stan gave this afternoon was almost as good the music had been. Short on canned humor, longer on interesting tidbits. The house was built in the 1850s by a Connecticut sea captain who made his fortune scavanging the frequent ship wrecks in and around the Keys. Hemingway bought it in 1931 for $8,000. He converted the attic of the carriage house into a studio and built a cat walk to reach it from his bedroom. He worked from six in the morning until noon and then he went fishing. He liked to sit in birthing chairs; there were several around the house. Hemingway had a six toed cat; dozens of its descendents still live in the compound (the bookshop under the studio is redolent of them). Picasso gave Hemingway a ceramic sculpture of a cat; it sat on top of a Spanish armoire in the master bedroom until December 2000 when a visitor swiped it. Pauline ditched the back yard boxing ring and replaced it with a $20,000 swimming pool; Earnest, in a rage, said she would spend his last penny and took one from his pocket and cast to the ground (she imbedded it in the terrace by the pool). Later he added a pool of his own: a urinal from a local bar set horizontally in the ground as a water fountain for the cats. Two thirds of everything Hemingway wrote was produced during the eleven years he spent in Key West. 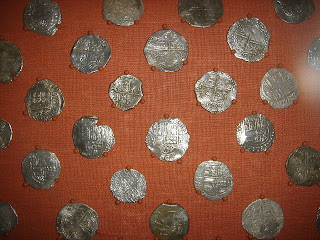 Another larger than life Key West character can be visited at the other end of Whitehead Avenue. Mel Fisher's story began when the galleon Nuestra Senora de Atocha sank in a hurricane one day after departing from Havana on September 5th, 1622. Fisher spent 16 years hunting for the wreck before discovering the "main pile" in 1985. Pieces of eight, gold bars, emeralds as well as astrolabes, cannons, crockery were part of a trove estimated to be worth $300 million. A small portion of the find is in the Mel Fisher's Maritime Museum . Visitors to the museum are encouraged to heft one of the gold ingots recovered from the wreck. I bet Fisher didn't need a tent for the party he and his crew had after finding the Atocha.
Posted by Atworth at 6:39 PM