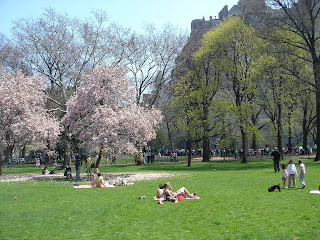 Three years ago, Christo transformed Central Park. I was reluctant to spend a gray February day in the park and was fully prepared to be disappointed. I wasn't. In fact, I was converted by The Gates within seconds. The installation was magic. The scale was breathtaking, the execution was impeccable; but for me the beauty was mostly in the mood The Gates created. Everyone in the park or near it was thrilled. For three of the most dismal winter weeks, those bright orange flags made New York a sunny place. Yesterday, Central Park had much of the same vibe. Rather than emanating from the vision of one artist, however, it came from the efforts, and perhaps relaxations, of many: Pope Benedict XVI, the local Earth Day organizers, Frederick Law Olmsted and the sunbathers. 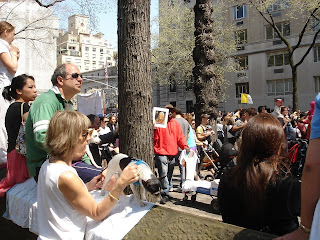 Along Fifth Avenue, throngs gathered to see the pope. Signs read "WE LOVE YOU"; some waved Vatican flags. There was lots of music and singing, mostly Latin American. Kids waited with their parents and dogs; no crying or snarling. Everyone was in a fine mood and the helicopters hovering directly overhead did nothing to dampen it. I saw Pope Benedict for a few blinks an eye, encased in his white popemobile. Lots of waving, cheering and then it was time for a walk in the park. 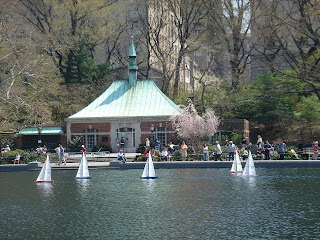 There were activities all over. Like the police spotters guarding the pope, Red Tailed hawks watched us from skyscrapers; we spied on them through Swarovski scopes. One meter yatching enthusiasts raced remote control boats in the Conservancy Water. Following in Dylan's footsteps, Don McCloskey sang protest songs to a new generation at the band shell. The music was part of an all day program organized by peacexpiece. Paul Kostabi provided direction for a collaborative patchwork mural, said to be the world's largest and longest "eco mural." Sunshine Burger and Wholemato handed out organic whole food veggie burgers with the best ketchup I've ever tasted. Glint and Rely Records distributed Dawn redwood seedling kits with instructions how to propgate them (and a web address to track where they are eventually planted). Lennon fans decorated the Imagine Mosiac with dozens of cut flowers. 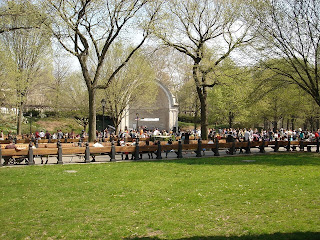 It was sunny, warm, and positively bursting with life. The grass was lush, the daffodils and tulips were glorious, and Olmsted's trees were sprouting fresh foliage which cast a lemon lime light. New Yorkers were soaking it all in. I can think of no better place on Earth to be on this particular day.
Posted by Atworth at 7:24 AM