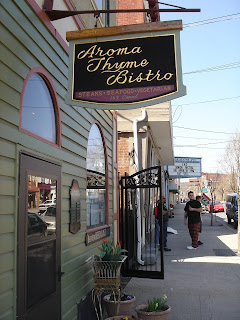 Chef Marcus Guiliano at the Aroma Thyme Bistro hosted a feast when Rogue craft brewers came to Ellenville. The five course menu was launched with Kells Irish Lager (which Marcus had on tap) to complement Marcus's spinach and apple salad with two blue cheeses (Rogue Crater Lake and Smokey Blue); the apple notes in the Kells were great with both the greens and the cheeses.

The Uber Pilsner cleansed the palate on the way to the next course: soba noodles with stir fried mushrooms and Long Island micro greens paired with Morimoto Soba Ale. The buckwheat noodles worked but the beer didn't. The beer was true to its ingredients but they are better in the noodles.

Next we had Emperor Fish with a Thai style coconut curry sauce accompanied by Rogue's Morimoto Imperial Pilsner. Both were outstanding and worked very well together. I will definitely be drinking the Imperial again. Morimoto has a big golden beer worthy of an Iron Chef.

At this point, Marcus interrupted the meal with a bonus 3 litre bottle he had been cellaring for three years: Hazelnut Brown Nectar. This could have been dessert. Rich and heavy with a hint of nutty sweetness.

Next came a couple of ales and a lamb steak with polenta and roasted onions (gotta love the onions). The Dead Guy and Saint Rogue Red both were up to the task. I'm not sure I was though.

Now came dessert: Sherry & Fruit Trifle with a glass of Chocolate Stout. Officially, there was no choice but to love the stout because the representative from Rogue had her picture on the bottle. Maybe it was the trifle which pushed me over the edge. Whatever it was, I was pinned to the mat and had to cry uncle. I never even tried the Old Crustacean. Marcus confided he still has some in the cellar. 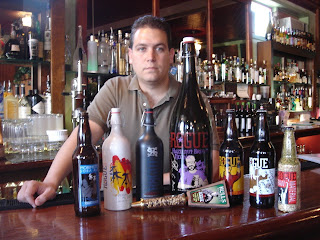