Barrel Conditioned Beer at the Toad 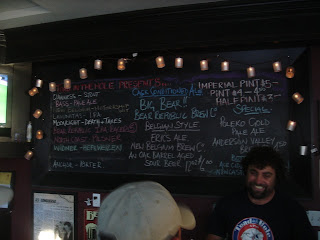 Barrel conditioning meant nothing to me in 1978. What will remain with me always is the taste of a cider drawn from a cask at a farm in Dyfed, Wales late one afternoon that summer. Father Doxsey had volunteered a bunch of boys to help a local farmer put up hay. It was a day much like today: hot, sunny and dry. Our reward was an elixar. Cool, frothy, sour, sweet and an aftertaste which has lingered for decades.

Paul Stokeld's beer engine caught my attention as soon as I walked into the Toad in the Hole in Santa Rosa, California. It was a little early in the season for room temperature beer, but I could not resist. Paul drew a pint of Big Bear Cask Conditioned Stout. It quenched my thirst nicely.

The Toad was a convivial place. There was a long bar populated by several groups engaged in animated conversation. A good selection of vintage British rock was on the sound system, loud enough to be heard but not so loud you had to raise your voice to talk over it. Futbol was on one flat screen, football on the other. A dozen beers were on tap.

Paul's menu featured quintessential pub fare. There was a cornish pasty at the top and I wavered. Ultimately the scent of malt vinegar tilted me toward the fish and chips. I was not disappointed. For dessert I drank a cold draught of Eric's "Lips of Faith" Ale from New Belgium . The peach infusion was magic. 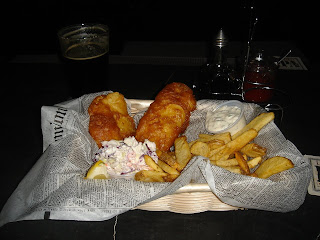