Rokket and Kavod at Rush Creek 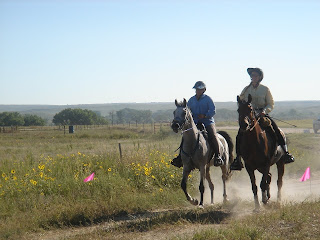 After the first twenty five mile loop of the Fifty Mile Labor Day weekend Reunion Race at Rush Creek Ranch in Lisco, Nebraska, Rokket and Kavod were about even. Riders Karen Kroop and Sue Horne had had a very tight finish in the 50 race the previous week at the Colorado Horse Park. There were whispers of unfinished business. When the race began at 6 on Saturday morning the air was clear, cool and still. By noon the sky was cloudless, the temperature in the eighties and wind about 15 knots: excitement was high.

This year, Rush Creek hosted its third endurance race and the second of what should become an annual Labor Day weekend event. Dozens of riders, mostly from neighboring states (and one, Robert Barkley from Pennsylvania, who has been to all three Rush Creek races), came to the home of endurance racing legends Rushcreek Ladd and Rushcreek Mark, both now in the AERC Hall of Fame.

The Rush Creek Land & Livestock Company was established around 1890 by Thomas E. Wells. It is a still a family owned cattle ranch. Arabians first came to Rush Creek in the 1940s after Chicago banker A.W. Harris persuaded his friend Preston Wells (son of T. E. Wells) to consider Arabians as ranch ponies. Preston reasoned that the size and disposition of the breed might enable cowboys to train their horses more quickly with fewer injuries. Over the ensuing decades, Rush Creek bred Arabians solely for ranch work.

In the early 1980s, Preston's nephew, Tom Wells was offered over $5,000 for a seasoned Rush Creek horse. “No horse is worth that much,” he observed and decided to accept the offer. At the time, Rush Creek provided each ranch employee four horses to work with. That meant there were potentially dozens of well trained horses to choose from. But at Rush Creek, once horses were turned over to employees, the animals remained in their care for as long as they remained employees. Tom would not pressure anyone to give up his or her horse. So he gave up one his own, Rushcreek Ladd.

Three veterinarians, Otis Schmitt(Tennessee), Art King (Canada) and Rich Palmer(Nebraska), supervised the races. Their goal was to ensure the "fitness to continue" of each horse in the competition (riders' health was a secondary concern). They looked for rapid pulse recovery (below 64) and then checked to make sure it was stable by having the rider trot the horse before checking the pulse again. They also listened for gut sounds and did pinch tests to see that the horses were properly hydrated. All horses were checked half way through each loop and again upon completion of the loop; there was a mandatory rest period after each vet check. 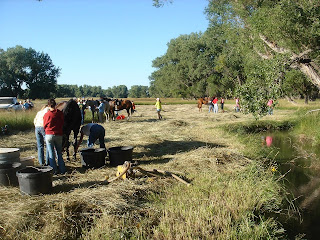 Cheryl Winter crewed for Karen Kroon and explained that well conditioned horses have highly visible veins and arteries which help the animal dissipate heat quickly. After the first half of the Saturday race, Rokket was at ease, his muscles clearly defined with a pattern of veins and arteries superimposed above them. 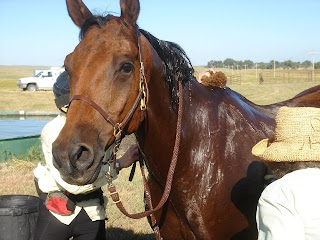 Typically after 50 miles, horses are spread out. But not at the 2008 Reunion race. The star performers in this year's first Fifty Mile were Rokket and Kavod. Rokket was a handsome fourteen year old with seven or eight years of endurance racing experience. Kavod was ten year old with five years of racing experience. After 50 miles on the trail they trotted up the slope approaching the finish line side by side. With a couple hundred yards to go, they broke into a full run. Kavod won the race by a nose. Rokket won the Rushcreek Mark Memorial Cup for finishing the race in the Best Condition. 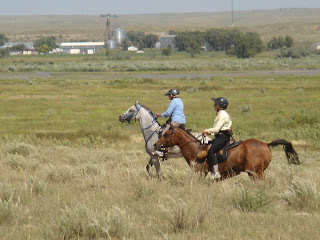 Well done. Thanks for the report.

Watching the Reunion Races was both a pleasure and an education. I look forward to seeing many more.