Vicky Emerson at the Carpe 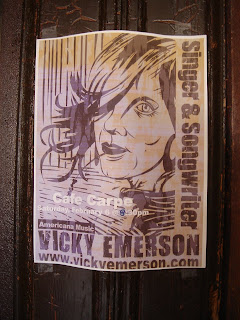 "Sage." Fred Scherrer makes single vineyard chardonnays in French oak, sometimes leaving them there for 18 months. When the wines are still young and the oak too pronounced "add some crunchy fried sage to the chicken (or whatever) and it will cancel the oak."

Vicky Emerson performed at the Cafe Carpe on Friday night. She looked and spoke a lot like the girls I wished I had known at the Ole Store in Northfield when I was in college. She played guitar and piano and sang her own songs beautifully. Bluesy country drawn from her life in rural Wisconsin, the Twin Cities, New York and on the road. She drew in the small audience in the Carpe's listening room with stories between each song. While the chattiness was humorous and sometimes edgy, it did not resonate nearly as strongly as the singing. The lyrics were unmistakably heartfelt; the patter needed some crunchy sage.
Posted by Atworth at 12:05 PM