Inside Nick's for an Outside Beef Sandwich 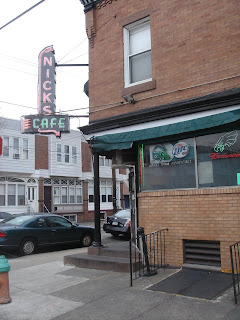 The narrow streets of South Philadelphia are one way and just wide enough for four cars side by side. Only one lane is open, however. On one side, cars are parked along the curb as they might be anywhere; on the other side they are completely double parked. At eleven in the morning there were plenty of gaps along the curb while the middle of the street was still chock a block. How did the inside cars get out? It was a mystery. The system must work, somehow.

"For beef, it's Nick's. They start with prime steamship round, roast it and serve it on a kaiser roll with aged provolone cheese. You want it wet."

Tony Catelli's father's shop was located at the same intersection of 20th Street and Jackson in South Philadelphia. Tony knew what he was talking about. 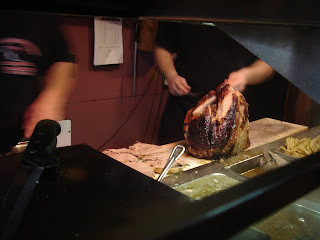 We sat in back and ordered french fries with gravy, broccoli rabe, peppers, and wet beef sandwiches all around. Sandwiches with and without cheese and one with outside beef. Our waitress was concerned about the order for the 'out.' First, it wasn't always available; second, it was spicier. It was available, it was spicier and it was excellent.

I would go back to Nick's just for the fries with gravy with broccoli rabe on the side. But I would be thinking about that outside beef. 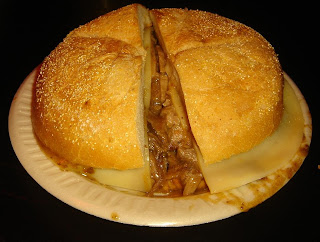 Get writing. Your acticles are great.

Hi Cole, I promissed you a recipe of feijoada!!

Place the drained black beans in a saucepan and add water to cover by 3 inches. Bring to a boil, reduce the heat to low, cover, and simmer until the beans are tender, 2 to 2-1/2 hours. Add additional water as needed to keep the beans covered.

While the black beans are cooking, prepare the meats. Preheat an oven to 375 degrees F. Dice the pork butt or shoulder and the bacon into 1/2-inch cubes. Place the pork, whole sausages, and bacon in a large baking pan. Roast until well done. The sausages will be ready after 35 to 40 minutes and the other meats after 45 to 60 minutes.

Cook the ham hock at the same time as the meats are roasting. In a saucepan, combine the ham hock rounds and onion with water to cover. Bring to a boil, reduce the heat to a simmer, and cook until tender, about 1 hour. Remove the ham hock rounds from the water and remove the meat from the bones, if desired; set aside. Or leave the rounds intact for serving alongside the black beans. Strain the cooking liquid into a bowl. Add the strained onions from the liquid to the beans. Add the cooking liquid to the beans if needed to keep them immersed.

Once the black beans are almost cooked, check to make sure there is plenty of cooking liquid in the pot. It should be rather soupy at this point. Stir in the beef carne seca. Cut the sausages into rounds and add them and all the other cooked meats to the pot. Then add all of the seasonings to the pot, including salt and pepper to taste. Simmer for another 30 minutes, or until the beans are very tender.

Taste and adjust the seasonings. Sprinkle with chopped cilantro or parsley just before serving.