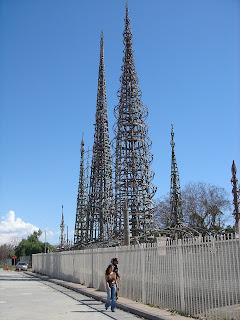 Los Angeles is spread out across a desert between the ocean and mountains. Perhaps because of the light rain overnight, the air this past Sunday was clear, the sky was deep blue and the snow capped mountains looked close enough to touch. I approached the city from the southeast on the Santa Ana freeway and one overpass along the way afforded enough elevation to see the cluster of skyscrapers way off to the north. I was far from the city center.

I imagine the sounds of Watts on Sunday were similar to those Sabato "Simon" Rodia heard when he moved to the neighborhood eighty some years ago. Trains jangled and whistled, people talked, the wind rustled, roosters crowed. But mostly it was quiet. LA's cars and highways seemed a long way off. In Rodia's day, they had not yet become the defining characteristics of the landscape. They still aren't in Watts. 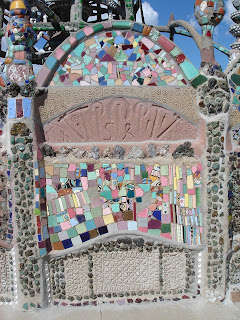 For most in my generation, if Watts is known at all, it is for the riots which took place there in 1965. At the beginning of the twentieth century, Watts was a farming community well removed from Los Angeles proper; it was populated by immigrants from all over, especially Latin America and Japan. 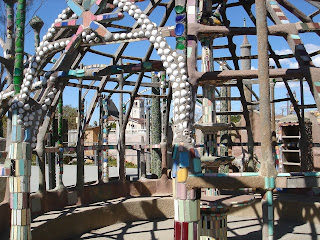 In 1923, Rodia bought a wedge shaped lot along a trolley line and spent the next three decades creating the most interesting back yard in America. Using only hand tools, scrap metal, concrete, and his imagination, he built walls, fountains, and towers nearly 100 feet tall and created what our guide described as an open air cathedral. And he did it without written plans or drawings, scaffolding or any help. His creation is thought to be the largest sculpture in the world made entirely by one person. 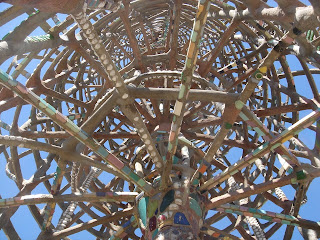 In 1954, Rodia's gave the property to a neighbor and left for good. Five years later the city of Los Angeles Building and Safety Department declared the towers were unsafe. A stress test conceived by an aeronautical engineer proved otherwise. The Watts Towers site is now a California state park and is one of nine works of folk art listed on the National Register of Historic Places. 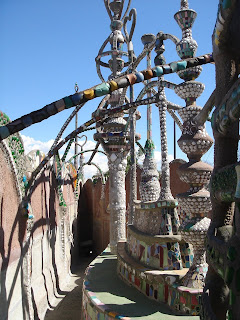 Simon Rodia continues to inspire. The visitor's center adjacent to the lot where he built is towers hosts art classes for the community. When I bought Bud and Arloa Goldstone's book about the towers, it was handed to me in a shopping bag. Without seeing the front, I offered to return it. I was gently advised to reconsider. I am glad I did. It was painted by the art director at the center. 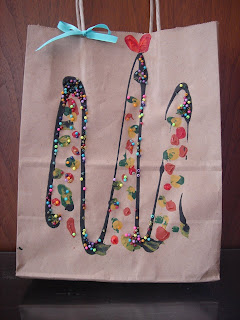