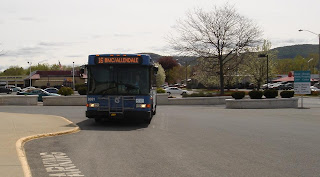 The mass transit system in Hong Kong is among the most colorful and efficient in the world. In addition to the world class rail systems, both above and below ground, it has London style double deck busses, mini busses, ferries, and trams. The Star Ferry and Peak Tram have never ceased to excite me, even after three decades. Everyone in Hong Kong is familiar with the system and almost everyone uses it regularly. It is so good I could not imagine a resident not using it. I was dumbfounded several years ago when I met a not-so-recently arrived British expatriate who had never ventured below ground on the MTR. Perhaps I should have been more understanding.

I returned to the Berkshires about six years ago. Over that time I have seen the shiny blue BRTA busses crisscrossing the county. Until this morning, I had never boarded one. I needed to drop off a car at Hertz in Pittsfield and then return to Lee. Hertz was located near the Allendale shopping center and BRTA route 2/16 began there and terminated in Lee. Perfect. I would take the bus.

No one at Hertz knew where the bus stop was; I asked at least five people. Directly behind Hertz in the shopping center, a clerk at Big Lots advised the bus stop was along side the Big Lots building. At 10:40, right on time, the bus pulled up to the building. Before I could get on, however, I was advised to allow passengers to disembark first. A frail looking old dear, with dark glasses and black gloves, declined my offer of assistance. A couple of big dudes wearing shorts and sporting dreadlocks followed. When I stepped on I was the only rider. The bus was spotless. The only advertising posters inside were public service announcements.

The fare from Allendale to Lee was $3.30, or $1.10 per zone with each town representing a zone. The driver would not make change, but he would make conversation. He suggested that at the “intermodal center” on North Street in Pittsfield, I buy a pack of gum at the coffee shop to break my twenty and then pay the fare. Fine. Contrary to an NPR report earlier this week about increased mass transit ridership in Boston, LA and Miami: “No. More people are not riding the bus around here,” the driver explained. “Only the poor and unfortunate ride the bus; the rest just complain about gas prices but keep driving their cars.”

The NPR story emphasized how the economy in general and fuel prices in particular were compelling the new straphangers to use mass transit. A sad story made only more so by the observation that those still driving were benefitting from less traffic. No doubt unintentionally, this month’s Berkshire Living magazine validated the notion that riding the bus is for the “poor and unfortunate.” Nowhere in an issue dedicated to “green” living was there a mention of the excellent BRTA busses or routes throughout the county.
Posted by Atworth at 12:18 PM