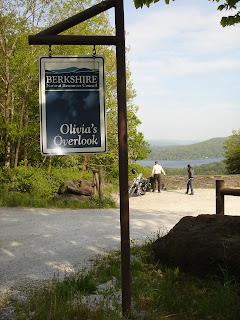 "Hanging on by your teeth" has new meaning. The view of the Stockbridge Bowl from Olivia's Overlook was superb. Marketers everywhere were trumpeting the first weekend of the summer and the elements agreed: it was sunny, cool and still. A perfect afternoon for a walk in the woods. Or so I imagined. 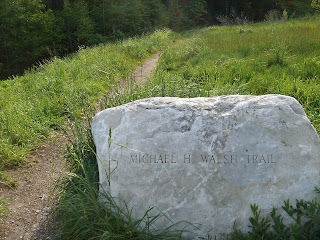 The Berkshire Natural Resource Council has done an excellent job marking and maintaining the trails. Mike and I set off to the south on the Michael H. Walsh trail. After crossing a footbrige at the edge of the meadow, a large sign provided a map described the Walsh, Charcoal and Ridge trails in detail. It warned of "tricky footing" in some sections.

The Charcoal Trail was named for the pits used to make the charcoal used as fuel early in the industrial revolution. By the middle of the nineteenth century, most of Massachusetts had been deforested, and these hills were no exception. Now they have largely reverted to mature forest with tall oaks, maples, white pines and hemlocks forming a thick canopy. 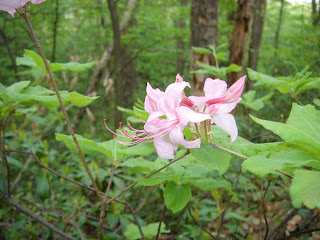 Native azaleas and evergreens formed heavy undergrowth. The "swamp pink" was already in bloom and the mountain laurel was on the cusp. 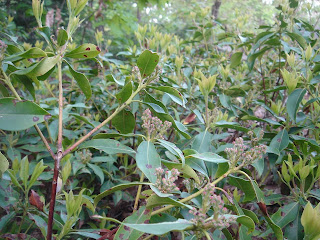 Mike and I continued further into the woods on the downhill slope with ease. The ascent was where the footing got tricky. For Mike. Under most circumstances, Mike is game for any hike. He will gladly march through heavy snow in sub zero temperatures; he is fearless in front of black bears. But the carpet of dry oak leaves on a narrow, steeply inclined trail bested him. Even with his claws fully extended, he was unable to obtain any purchase. He slipped off the trail and began sliding down the slope on his back. He accepted my hand with the only tool he had left: his teeth. And he hung on as tightly as he could without causing me harm. I slid down beside him, picked him up and carried him back to the trail. Nothing doing. He aimed straight down hill and walked away, completely off the trail. I followed, eventually putting him back on the leash. We made our way back up the hill on an ancient diagonal track which I suspect was originally used to drag logs up to the charcoal pits. 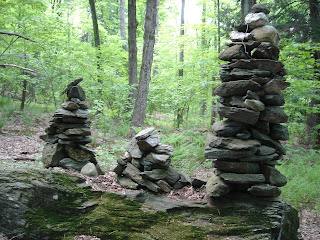 I was not able to figure out the purpose of the rock columns. Druids maybe? Mike was totally disinterested. 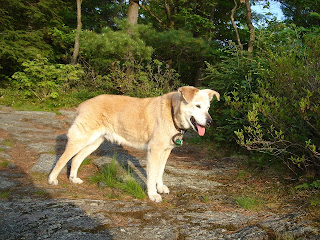 He was, however, thrilled to be back on the ridge and in the sun. Haze obscured our westward views but not joy of sitting and enjoying them. 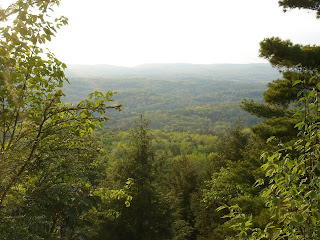