Gout is a helpful companion. Earlier this month, we celebrated my brother's birthday at the Crab Claw in Saint Michaels, Maryland. I tucked into more blue crab than prudent and Gout came around the next day to remind me to behave. Several years ago in Venice, zuppa di fagioli prompted Gout to persuade me to remain within gimping distance of the Hotel Ala and not ramble off cross country. Thanks to the extra week, I fell in love with a city I might otherwise have dismissed as an interesting museum. Today Gout has focused my attention on the fine ale and rack of lamb I enjoyed yesterday in Kingston, New York. 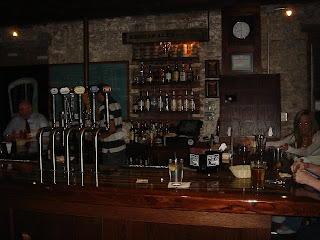 The evening started around six at the small bar inside Keegans Brewery. A pint of Old Capital (Kingston was the first capital of New York) followed by a pint of Belgian style white beer. The Old Capital was refreshing (and glasses around the bar were refreshed regularly); the white beer was an eminently acceptable local beer but lacked the depth of Blanche de Chambly from Quebec. The vibe at Tom Keegan's place was one which craft brew joints everywhere would do well to follow: super casual and genuinely warm with a nice mix of music set low enough for normal conversation. Everyone seemed to know each other. No one objected to the peanut shells covering the floor. 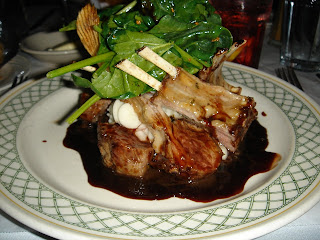 Dinner at Le Canard Enchaine proved to be an ideal place to finish the day and conclude the week. Chef/owner Jean-Jacques Carquillat met us at the door and led us to a table in the bar. The mood was unabashedly happy. The rack of lamb was one of the night's specials and tasted great. It was served medium rare with a thick red wine sauce and accompanied by sauteed spinach and mashed potatoes. Now that I know where to find Le Canard, I plan to waddle back often.
Posted by Atworth at 3:38 PM