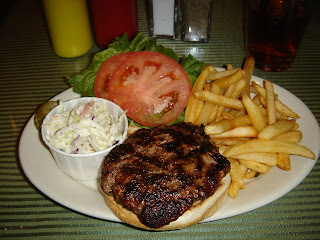 There is no better place in Berkshire County to get primed for a hamburger than the intersection of North Street and Linden in Pittsfield. Mark Papas mans the charcoal grill at The Lantern (455 North Street, 413-448-2717). His exhaust fan delivers an aromatic invitation to purchase more effectively than any billboard, print ad or radio spot. The 6 ounce burgers are formed by hand and grilled on an iron grate. They have all the appeal of the best backyard burgers, they are available year round and they can be accompanied by Bass, Blue Moon or Sam Adams on draught or about a dozen others in bottles. The Lantern Bar and Grill has been in Mark’s family for decades. It has a comfortable lived-in vibe with cool jazz on the sound system and a collection of oil paintings and photographic portraits on the walls. 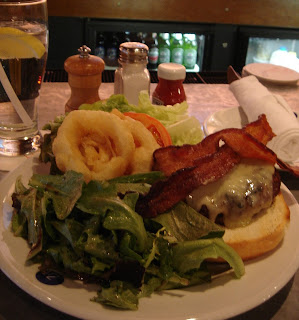 The best burger in Lenox is at Bistro Zinc (56 Church Street, 413-637-8800). Chef Michael Stahler gives every bit as much attention to his burgers as he does to any of the other dishes on his eclectic menu (Shepherd’s Pie made with shredded duck confit and Pei Moules Frites are also on the lunch menu). The 8 ounce patties are made from fresh Angus beef, topped with Tillamook cheddar cheese and two strips of Jones Cherry Wood Smoked bacon and a couple of tempura batter onion rings. On the side you have a choice of either a mountain of fries or a mixed green salad. The bar at Zinc has been a hip place to hang out for the better part of a decade. True to form, it has an impressive selection of French brandies and single malt whiskies. For the burger and beer patron, there is enough on tap or in bottles to satisfy. 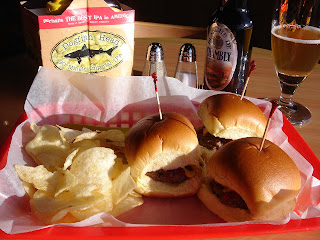 Further down county in Lee, you find tasty burgers at Moe’s Tavern (10 Railroad Street, 413-243-6637). But you will need to look hard for them because Moe’s is all about beer. Tavern keeper Josh Cohen’s latest tally is over sixty craft brews in bottles and five on tap (numbers he hopes to double in the near future). Moe’s has been in business for just a few months and has been bucking conventional wisdom by offering little of the ordinary (Budweiser, Miller and Sam Adams are available but move slowly; Coors never crossed the threshold) and lots of the extreme (like Stone Brewing's Arrogant Bastard and Dogfish Head's 120 Minute IPA). He also offers fresh burgers and locally made hotdogs. The Sliders hit the spot. There are three hand formed 2 ounce patties on potato flour buns with basic fixings. That and a bottle of Blanche de Chambly and I'm good.
Posted by Atworth at 9:08 AM

I wasn't hungry until I read this piece! Good copy and good pics. You are the burger king, Atworth.