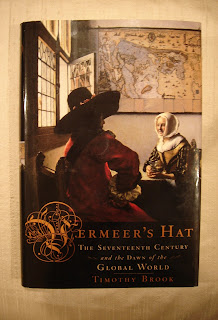 One of the most captivating sights at the Neka Museum in Ubud, Bali is a pair of portraits painted by Abdul Aziz called Mutual Attraction. On the left is a young man peering out; on the right is a young woman soaking up his attention. Both appear to be standing in door ways, leaning against the frames. Aziz painted his subjects’ shadows directly on to the picture frames. It was a delightful conceit. It not only added a dimension to the pictures but it also impressed upon me that paintings are both windows and doors.

Timothy Brook became enchanted with Johannes Vermeer's home town of Delft as a young man; he went on to become a specialist in Chinese history. From that "promontory" he created an immensely satisfying study not only of Vermeer's work but also the forces which began driving world trade four centuries ago. In Vermeer's Hat, Brook looked into the artist's paintings and saw objects, metaphorical doors, which opened into what he called the "global world."

The Netherlands in the seventeenth century was the most prosperous trading nation in Europe. China was thought to be "a place of power and wealth beyond any known scale." There was thus intense competition to establish trading links with East Asia. Establishing those links changed the world.

Many of the items depicted in the scenes Vermeer painted would not have existed in Delft a generation earlier. In the View of Delft, one of the roof tops belongs to the Dutch East India Company or VOC, the world's first large joint stock company. Its structure quickly enabled it to become a powerful trading company, as well as a model for modern corporations. The search for a short cut to China resulted in abundant beaver pelts being exported from North America to Europe, which, in turn, led to lavish hats seen in Soldier and a Laughing Girl. Blue and white porcelain, newly imported from China, was superior to any pottery made in Europe; demand for it was so strong that it was copied in Delft, and then was transformed to become a style synonomous with the city itself. Tobacco from North America quickly found markets everywhere, especially China. Silver mined in South America facilitated trade in all directions. African slaves provided labor. Brook cited Fernando Ortiz' process of transculturation and showed how trade changed parties on both sides of a transaction, often in ways which were totally unanticipated.

Given the level of anxiety about global trade today, it might seem like a recent development. But its cross currents have buffeted and enriched the globe for centuries. Three hundred years after the VOC began its march across Southeast Asia, Abdul Aziz joined the fight asainst the Dutch for Indonesian independence. Later he studied art in Rome. His style was deeply influenced by the European masters, Rembrandt in particular, and embodied the very "transculturation" Brook described.
Posted by Atworth at 8:08 PM