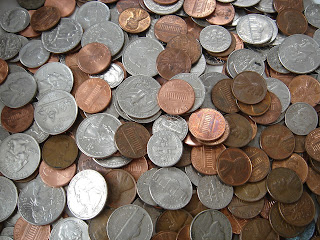 Coins are pests. Every day, I accumulate more spare change: on counters, on top of furniture, between cushions, in drawers or on the floor and in the console, cup holder or some hard to reach spot in the car. Coins gather like dust, only dirtier and slightly more valuable. But not much. Nothing costs a penny. Even pennies cost more than one cent. Savvy merchants and restaurateurs have abandoned the 99 cent ruse and rounded up to a full dollar. Few bother to pick up pennies (unless with a vacuum); when cleaning drawers, some people would sooner dump the random coins in the trash than touch them.

Banks no longer want to handle them either. When I went to Lee Bank with a sack full of coins to run them through a coin counter and convert them to greenbacks, I was advised the bank did not provide that service. The teller recommended I make change at Stop & Shop instead. When pressed further, I was given flat coin rolls: the bank would accept full rolls of coins if I counted them myself. 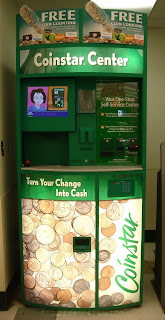 Stop & Stop installed Coinstar coin counting kiosks several years ago. At first I thought they were great. Then I learned there was a catch: there is an 8% service charge. Eight percent. If I were to calculate what my time was worth, it would be an easy decision to simply dump the entire bag of coins into the hopper and give Coinstar its due. But I am too cheap. I find it galling that I am compelled to pay a retail establishment to count the cash I am willing to tender there. So I compromise: I let the machine count the pennies and I take the time to sort out and put the silver coins in their respective rolls. Now when I spend those rolls, I am asked to sign them like a check. 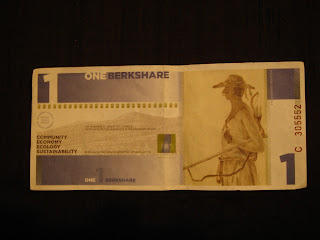 Recently it occurred to me that the coin changing machines could be deployed to dispense BerkShares, a scrip honored by Berkshire County merchants and restaurants. They are sold to consumers at a 10% discount to US currency but can be redeemed at the face value of US dollars. As such they offer a monetary incentive to support local enterprises. Since I shop or dine at many of the places which accept BerkShares and settle the bills in dollars, I would be happy to convert my bags of coins to BerkShares at face value. I can get rid of loose change, support business in the community and use some really cool money. The BerkShare discount could be divvied up between the BerkShare organization, the merchant housing the coin counter (Guido’s or Lee Bank, for example), and the owner of the kiosk. Balances of less than one dollar could be returned as change or donated to worthy local causes. In a small, and perhaps attractively subversive way, this puts small change to good use.
Posted by Atworth at 8:26 AM

Dear Cole!
I just looked around your blog and I love all your articles and writings. "Change for Good" reminds me to the coins I have still in Germany from the US...
Anyway, I hope you are doing well and I am sending you warm regards from Rio de Janeiro.
Hope to see you again one day
RuAg

Dear Atworth,
I like the idea of Berkshares. I am going to share it with my Chamber.
Grubby Girl

Thanks for checking out Atworth At Large. Hope everything is going well for you in Rio. Keep me posted.