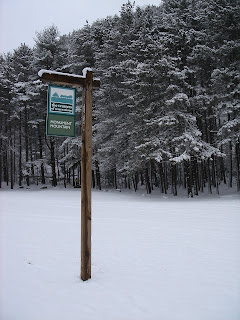 Route 7 northbound out of Great Barrington, Massachusetts is steep enough to merit two lanes going up hill on the east side of Monument Mountain. The posted speed limit is 50 miles per hour. I have been passed by guys on crotch rockets doing at least twice that. One friend who rides a Japanese wannabe Ducati claims to have done 130. He covered the mile and a half stretch to the Trustees of Reservations parking lot in about 45 seconds. If he were to complete the trip to the summit of Monument Mountain, he would be obliged to do so on foot and it would take at least another 45 minutes (longer at this time of year). I will not claim that reaching the peak on foot is as much of a rush as the high speed ride, but it is thrilling nevertheless. 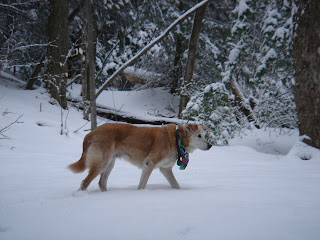 Mike, my hound, is extremely indulgent. He always forgives my absences (sometimes extended) and has submitted to being spirited across oceans and continents (he was born in Taipei sixteen years ago). For the past several days, he has ridden shotgun while I have made my rounds. Long hours in the wagon with only short pit stops. And all he asks is that he be allowed to clean the dishes and go for interesting walks. Since both benefit me, you might think I would repay his kindness more often. Last night he scored some leftover steak and today we tackled a big hill. I reckon I still owe him, but I am moving in the right direction. 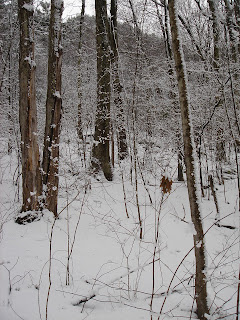 Hiking up and around Monument Mountain is an excellent way to spend a couple hours. The paths are challenging but well marked and maintained. The the oaks and pines form a nice canopy so undergrowth is minimal, but there is lots of mountain laurel. Outcrops of ledge are punctuated with seams of marble and flint. The views from the peak are superb, extending in all directions from several different lookouts. From the parking lot, I prefer to follow the trail north and make the steep climb up, then complete the circuit by following the gentler slope down to the west and return to the lot from the south. 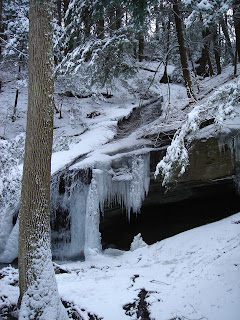 Monument Mountain has been attracting visitors for hundreds of years: Nearly 200 years ago William Cullen Bryant wrote a poem about a Mohican woman who leapt from a cliff (a cairn in her memory resulted in the name of the mountain). Years later Nathanial Hawthorne and Herman Melville were introduced there; Melville was already writing Moby Dick, their mutual admiration was so strong that Melville dedicated his masterpiece to Hawthorne. 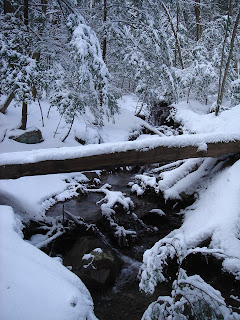 Today the mountain attracted a few hearty souls. We saw several groups of two or three hikers; one couple was accompanied by a four legged yearling blond. Mike made her acquaintance and was feeling fine. New snow had fallen so the trail was not as slick as it would become after having been packed and frozen. I followed European alpine fashion and walked with a pair of poles: they were a boon on the way up and a life saver on the way down. When we arrived around 2:30 the snow had stopped falling and there were patches of blue sky. I hoped we might have clear skies by the time we reached Squaw Peak. 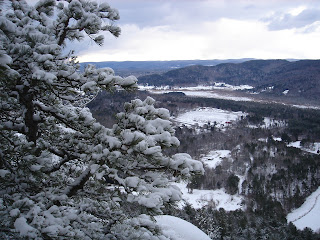 We were on top by 3:30 and had fine northeasterly views of Stockbridge and Lee. Two hikers approached from the south and warned about a snow storm coming from the west. They did not stop to admire the view to the north. A wiser soul would have joined them for the trip back down. I was more interested going forward and looking out over Alford, Great Barrington and Egremont. 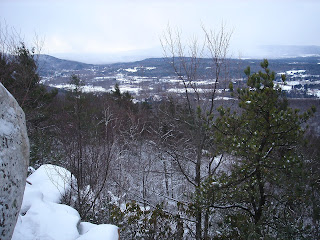 Mike was an intrepid hiker as long as he was convinced his footing was sound. That excluded foot bridges and rocks. Back on the leash, he was happy to follow and crossed the foot bridges and stony ledges without resistance. Now it was important to keep him on a short lead to eliminate lengthy inspections of interesting trees, boulders, nooks and cranies. The snow squall to the southwest was less than five miles away, so we had little time to get off the peak and back on to the wide gentle slope trail half way down the mountain. Hoping to avoid being caught in a white out on a trail with white blazes, we made haste. The wind came up and it started snowing soon after we began our descent. It was 4:30 when we arrived back at the car, now covered with new snow. Mike was thrilled to have spent the afternoon in the woods and I was thrilled to have seen the winter landscapes from the top of Monument Mountain and escaped a blizzard on the way down.
Posted by Atworth at 5:29 PM

Cole,
I'm sitting here in nothing but a pair of shorts. The temp is just shy of 90 degrees here in Bangkok. No snow in sight; no hills for that matter. The local pack of dogs pant heavily, but certainly not from exertion. I believe my body temp was lower by a few degrees by the time I reach your car. Thanks.

A tempting trip come spring, before the black flies
make their appearancein May. Good pictures
Margot

Margot, let's take our dogs together. the forest floor is better than the kitchen floor. Great blog, darling Cole!

Love the picture of Mike-the- intrepid-one. He looks great at 16!

Dear Atworth,
Yesterday, I was able to go on a hike with my husband and dalmation, Latte. We enjoyed the beautiful Colorado royal blue sky, sun, snow and trickling river. Latte loves to hike!
Grubby Girl