Monk's Pond and the Burbank Trail 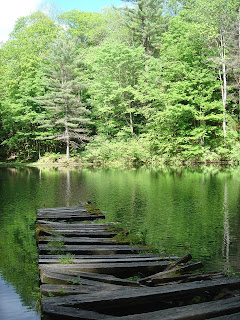 Kids from Namche Bazaar in the Khumbu region of Nepal hike a couple miles to school in Khumjung. They start 11,200' and end up at 12,600'. Flat landers like me were astounded by the sight of children in uniforms with bookbags joshing around. The altitude had already rendered us breathless. (Perhaps sherpas are fascinated by American kids skateboarding to school.) I thought about those kids this afternoon as I walked up the BNRC's mile and half long Burbank trail from Olivia's Overlook to the hardscrabble home sites at the top of the hill. 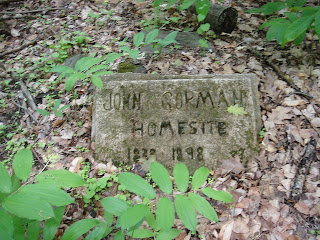 After the land was cleared for firewood or charcoal, it was farmed for the better part of a century until Anson Phelps Stokes bought it as a part of his Shadowbrook property. The terrain was rocky and steep in most places. From a twenty first century vantage, I briefly imagined life at a remote hilltop settlement with little other than impressive views in its favor must have been oppressively difficult. Then I remembered the joy of the kids from Namche on the way to Khumjung. 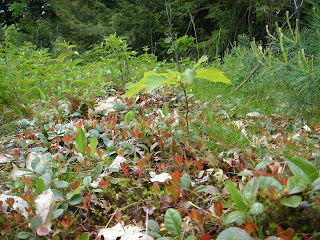 There was a lot to see and smell at walking speed. The rain yesterday amplified the damp leafy fragrance of the woods. Hemlock, moss, wintergreen, punctuated by a little skunk. 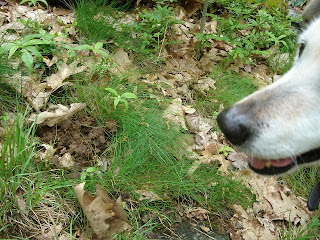 Mike concentrated on aromas beyond my ken. Most of the items he investigated were invisible. But he did discover an enormous pile of scat. Since its contents were entirely herbaceous, I suspected a moose but found no tracks to confirm the theory. I saw at least a dozen newts. Mike ignored them. 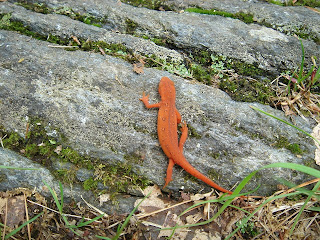