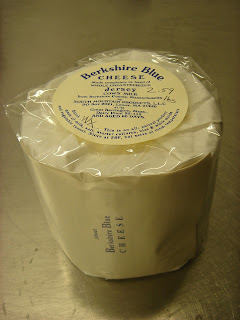 Barbara Kingsolver has written a new book, Animal, Vegetable, Miracle. She has followed up on a theme her friend, Gary Paul Nabhan, developed several years earlier in Coming Home to Eat, namely eating foods which are produced locally. This comes naturally to some. For most, however, the idea is so novel that Nabhan and Kingsolver find wide audiences for their observations on the challenges faced and lessons learned when they committed to eating local.

Nowadays most places which produce food specialize: they make a lot of one thing and little or nothing of everything else. Almost everyone takes this for granted. Organizations like Berkshire Grown are doing their best to raise awareness and promote the benefits of locally produced foods. But they face huge challenges when markets like Guido’s and the customers who shop there, very sympathetic audiences indeed, demand a much wider variety of products than can be supplied locally.

The truth is we want both. We want the local producers to succeed because it makes us feel good. But what we really want is a huge assortment of choices and year round availability. And we assume what we want is not local. 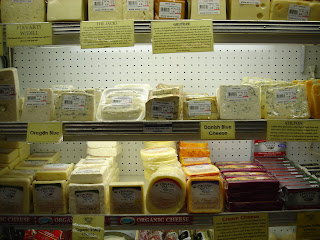 Perhaps this explains why when Guido’s has a dozen blue cheeses, among at least 100 other cheeses, they don't bother to point out the obvious: that Berkshire Blue is "Berkshire Grown." Stilton gets a detailed placard, as do many other notable cheeses. Hidden among them is Berkshire Blue. No introduction necessary, apparently.

Berkshire Blue is made two miles from Guido’s Fresh Market in Great Barrington; the dozen Jerseys cows which produce the milk it is made from graze eight miles up the road at a farm in Alford. You can’t get much more local than that. 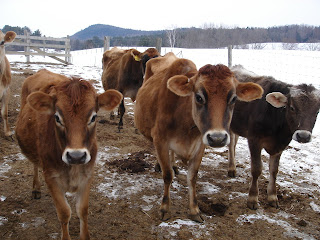 Michael Miller started making blue cheese in 1999, after learning how at the Willett Dairy in Somerset, England. For the past nine years, each week he has been aiding and abetting nature in transforming hundreds of gallons of raw, unpasteurized milk into wheels of blue cheese.

It is a hands on, time consuming process, beginning with the cows. They are milked one at a time. Michael is licensed to transport milk: he collects it early in the morning, transports it to the dairy and starts making cheese immediately. Once at the dairy, however, nothing is rushed. On the first day, Michael brings the milk to temperature slowly, then adds starter cultures followed by two blue moulds and finally rennet, an enzyme which causes the milk to solidify. Before the day is done, he will separate the whey (which is returned to the farm and fed to pigs) and transfer the curds to 66 molds. Over the next two days the molds will flipped regularly. When the molds are removed, the wheels of cheese are transferred to a brine tank where they will soak for 12 hours. Michael calls this "giving the girls a bath." The "girls" are allowed to dry for several days and then placed on pine planks where they will age for the better part of two months. 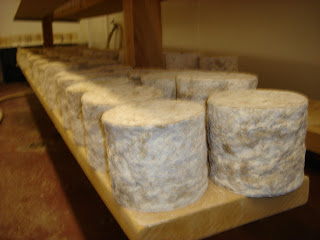 Wine makers talk about "terroir" and their desire to allow the wines to express the characteristics of soil on which the grapes are grown. Some cheese makers have also adopted the word. Michael doesn't believe terroir plays a significant role in Berkshire Blue. More important than the land are the quality of the cows, the grass they eat and the milk they produce. He recognizes that the cows' diet changes with the seasons and this will change the consistency of the cheese. But as an artisan cheese maker, he adheres to the same recipe and adjusts only time and temperature to achieve optimal consistency. 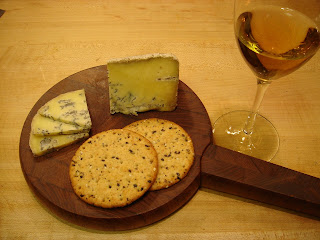 Michael recommends serving any cheese at room temperature. The wedge I had for dessert tonight was a deep yellow punctuated with pockets of sage colored mould. It was firm, the flavor was very mild and fit perfectly with a glass of Hardy's 2002 Botrytis Semillon.

I suspect when he embarked on this adventure, Michael would have been happy to sell all of his cheese in Berkshire County. But there wasn’t enough demand. So, like all ambitious cheeses, Berkshire Blue headed to the big city. In 2001, she (after all, Michael does refer his wheels of cheese as "the girls") was awarded a silver medal at the World Cheese Competition in London and the following year she won the gold there. Since then she received many other awards. Now Berkshire Blue is distributed nationally. She alao maintains a discreet presence in the Berkshires.
Posted by Atworth at 12:46 PM

Frequently when I have guests for dinner I serve Berkshire Blue. Without exception the cheese gets rave reviews. I note with pride that the cheese is locally made by a very talented cheese maker.

A wheel of Berkshire Blue as a house present, is always very a very popular present.