The Arb, the Apollo and Tooo Chinoise in Oberlin 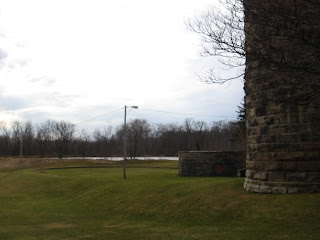 Eisenhower’s Interstate Highway system shrank driving times and boosted economies along its path. While the topography changes dramatically from East to West, the human developments along the I-roads are completely reassuring: the same Mc Donalds, Marriotts, and Mobils everywhere. I have often thought about driving cross country on US 20 instead of I 90, taking time to see the towns change along with the landscape, but I am always seduced by the fast route. This time the travel genies conspired to slow us down and encouraged us to spend a day looking around.

The VW required new brakes around 40,000 miles, so I was not surprised that it would need new brakes again now that the car had 75,000 miles. I usually have the car serviced before an extended road trip but this time I was unable to schedule an appointment. So we hit the road anyway. When we arrived at the Holiday Inn in Elyria, Ohio the rear brakes made a hideous noise. Spitzer VW in Amherst agreed to look at the car immediately. As chance would have it, the necessary parts would not be in stock until the following day and we were only 8 miles from Oberlin.

While it is only a few miles south of I 90, the approach to Oberlin bears the signs of a town which has very much been passed by. There are no strip malls. The slate roofs of barns and farm houses sag, threatening collapse, the cows long gone and most of the farmers gone with them, their lands committed to row crops but no livestock. The houses on the outskirts are in better shape but most of have seen better days. Oberlin proper, however, appears to be healthy and not much changed from Eisenhower’s time. The college and commercial establishments are centered on a very large square populated with mature trees, a few random students and a professor or two.

We had lunch at Tooo Chinoise. I expected to find some cool restaurants in a college town. This menu caught my eye with Zajiang Mien and Shrtz Tou, two dishes I hadn’t seen since I lived in Taiwan. I over ordered and loved each bite. Our waitress recommended a walk in the arboretum on the outside of town (but only a few minutes walk from the center). The temperature was in the sixties and all the snow and most of the ice had melted. Shorts and tee shirts for the students; no leashes for the dogs. We hung out there until dusk. Later we went to the flicks.

The Apollo Theatre is a classic: lights from the marquee cascade over the ticket booth. Shows cost $3 and a large popcorn is only $2.50. The place seats around 900 and I suspect there were about 100 there on a Monday while most students were still away for winter vacation. I am Legend with Will Smith was not legendary material (Night of the Living Dead crossed with Twelve Monkeys), but it was perfect for that old movie house. If I lived near Oberlin, I would be a regular. 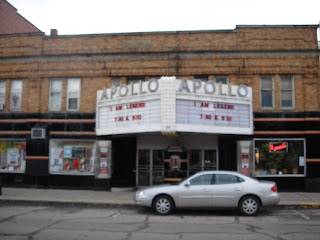