No Coors Light at Moe's 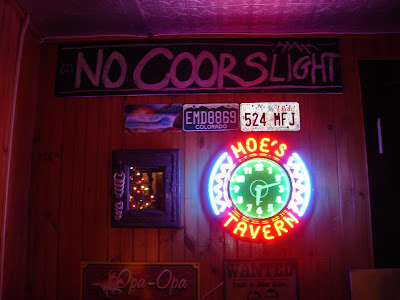 For years, the WNOF group in Taipei met at the Mariner’s Pub after dinner on Wednesdays. We arrived around nine, enjoyed a happy hour which lasted until we ventured out into the Zone and went our separate ways. A change of ownership and attitude at the Mariner’s persuaded us to move our party to the Manila, another bar a few doors down the same alley. Perhaps it was just coincidence, but it seemed that before our crew started hanging out at the Manila on a weekly basis, it was not a regular stop for anyone. It was always empty. Then Jackie reserved a table for us up front in the window and when we were there the place looked packed. Later we noticed business at the Manila improved and not just on Wednesdays. You couldn’t see in the windows at the Mariner’s and since none of our crew ever went back, I can’t say what happened to their business.

When Josh Cohen rehabilitated a bar on Railroad Street in Lee, he removed the curtains from the windows. Good call. Now you can see what is going inside from across the parking lot. A couple months ago, I was looking for a place to watch a football game and I could see the flat screens before I was out of the car. The place looked alright, so I went in. 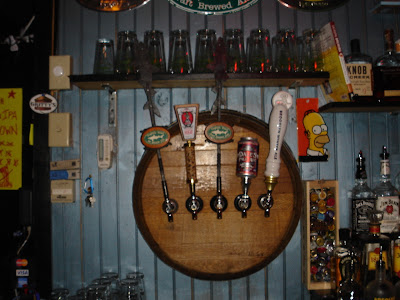 Josh calls the place Moe’s Tavern. While Homer Simpson would feel right at home (it's all about the beer), it is not a typical neighborhood joint, at least not around here. There are three or four decent screens usually tuned to some sporting event, but the volume is off and satellite radio is on. There is a full bar and a very short menu featuring fresh hand formed hamburgers, Wohrle’s hot dogs and a couple different fries. The main attraction, however, is the assortment of craft brews. The latest list had over fifty and the number keeps growing.

Josh went to school with the founder of Dogfish Head, so those beers are featured prominently on draught and in bottles. He brought in my favorite Canadian beer, Fin du Monde, after I asked for it (a great way to make a customer loyal). So far, the discovery I like best is Lagunitas from Sonoma County; try their Czech Pilsner. The biggest miss was Anderson Valley's Winter Solstice: it took courage to drink past the aroma which assaulted my nose when I first lifted the glass (it was an experience akin to eating durian).

There is no Coors Light at Moe’s (but next season Yankees fans may be able to watch their team on an old black and white tube). 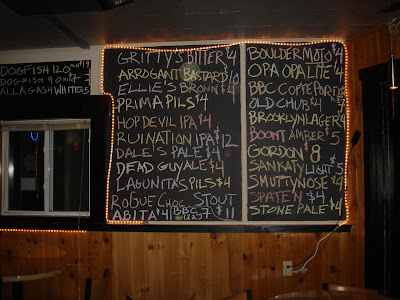 Sorry, I do not know what durian is. I guess is some typically awful chinese "delicacy".You are some intrepid gourmand...

Durian is a Southeast Asian fruit. It is indeed considered a delicacy. And it really stinks.

In Kuching, East Malaysia, I visited a market which specialized only in durian. I was advised there were multiple grades which commanded a range of prices. The least expensive was about $5, which may seem moderately expensive to a Westerner but was really worth much more in the local economy (consider that same $5 was also about the same as a laborer would earn in a day--more like $40 if compared to one day's work at minimum wage in the US).

The market was very busy. The fruit was in season and it appeared quite a few shoppers were willing to commit substantial sums to enjoy it. I have tried the fruit (and it does taste better than it smells) but I have never been seduced by its charms. To me, durian still stinks. Many Asian feel a similar revulsion to cheese.