Cousin Ruth and the Stone Bones 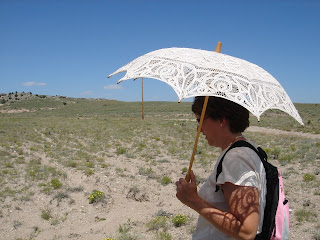 Years ago, Ruth discovered fossil camel and rhinoceros bones exposed in a mound in western Nebraska. This was no idle claim: the bones were properly identified, catalogued and displayed at the University of Nebraska in Lincoln with full credit given to the finder. Yesterday, we returned to the site of her discovery. 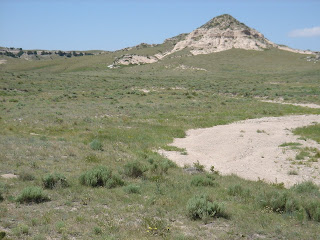 A Brule clay mound rose about 100 feet above the surrounding terrain. Ruth said the fossils she found were "just lying on the ground." I was incredulous. "A tooth was exposed, and then we dug out the jaw." The mound was located about two miles north of the North Platte about 200 feet higher than the current highwater mark but still well within the wide valley the river has cut over eons. The ground was littered with smooth, flat granite and basalt stones which had been carried from the mountains several hundred miles to the west and then deposited here when the channel shifted south. 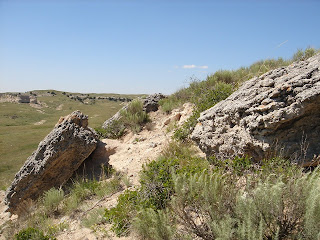 William, Ruth's son, made the first new discovery. It was a rib fragment which "chinged" when he tapped it against another rock. He thought it was metal and was prepared to discard it. Soon his brother Edward found some fossil bone fragments. They were indeed just lying on the ground. They were near the top of the mound and somewhat protected by thick slabs of limestone which originally capped the oligocene clay mound and inhibited erosion. The age of clay suggests the bones we found protruding from it were 25-30 million years old. 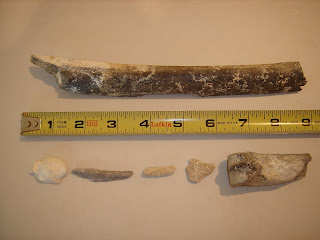