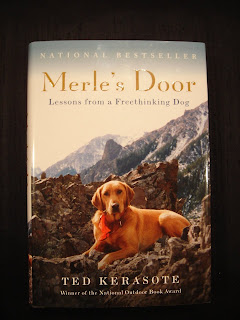 Europeans understand dogs. Their dogs are typically well behaved. Dogs are welcomed in restaurants, and only American tourists seem to notice. In Merle’s Door, Ted Kerasote described the center of Chamonix where the local dogs congregated to socialize during the day before returning to their respective homes in the evening. They were well groomed, collar wearing, and registered. And they were enjoying the liberty, equality and fraternity guaranteed all French citizens.

Most dogs aren’t so lucky, at least not in the developed world. Our dogs may be well fed and thoroughly inoculated but they are nervous and behave poorly; often they are not able to be simultaneously happy and relaxed. Cesar Millan spoke of his grandfather’s farm in Mexico where all the dogs figured out how to fit in both in their immediate pack but also the larger community of people and other animals. They had jobs to do and were well adjusted. The village dogs I saw in Asia also seemed to get along well without much human interference. These third world dogs were filthy but happy. (The farm and village dogs should not be confused with the frightened strays scavenging around cities in the developing world—these truly are wretched creatures.) In Kelly, Wyoming, where Kerasote lived, the local dogs were free to come and go as they wished. And Kerasote’s dog Merle had his own door. And this, he believed, was the key to Merle’s success in becoming an equal partner in their life together.

Interspersed between the stories of Merle’s ability to learn, mature, and enjoy himself, Kerasote referred to a variety of experts, including Temple Grandin, Elizabeth Marshall Thomas, Douglas Smith among many others to find scientific evidence to support assertions based on his own observations of dogs in general and especially Merle. The book offers a lot of practical advice on how to understand dogs and what NOT to do to allow them to mature. But mainly, Merle’s Door is the story of a rare friendship.
Posted by Atworth at 5:45 PM