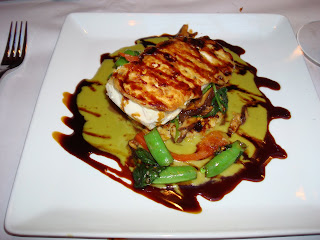 Several days ago I was driving through an old Dallas neighborhood which had some of the same early twentieth century bungalows which give Boulder, Colorado a lot of its charm. In Dallas many of those old houses are being torn down and replaced by handsome new piles two or three times as large. In Boulder the small houses are beautifully preserved and carefully landscaped. Their owners clearly care as much about the space around their houses as the space inside them. Quality over quantity.

I love visiting Boulder. It is a cool town. A town, not a city. It is small enough to walk around comfortably. And it seems most residents do walk around. Many with dogs or kids or both. The place has a great vibe. Residents of Boulder may not feel it is important to upsize their houses but they have substantial expectations when it comes to food. Pearl Street is a fine place to stroll, especially if you are looking for a great meal. I have had several at Jax Fish House. Chef Rosenberg has a lot of fun fusing flavors from all over. 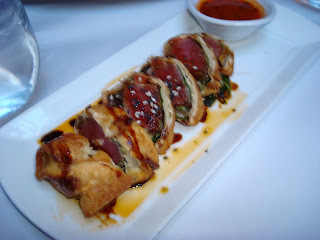 My most recent adventure started with one foot in Mexico and the other in Japan with the "Chimi," an ahi tuna sushi roll with a chimichanga crust. Since my companions were busy with oysters, I felt absolutely no shame in keeping it all to myself. 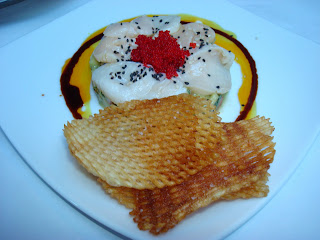 Chef Rosenberg must like working an Amerasian melange because the next dish featured Maine scallop ceviche on a bed of avocado cucumber salsa and topped with tobiko. It was mindnumbingly good. Then, with my feet firmly planted in on the eastern side of the Pacific rim, I devoured the so called Tuesday "blue plate" special (shown at the top of the page): New Zealand Blue Nose with a Thai curry sauce. My only complaint was the color of the plate. No blue. 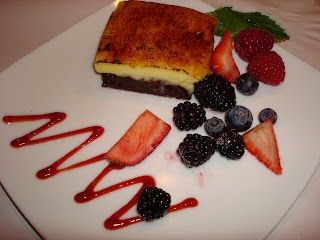 The short walk to Jax had offered a quick trip around the Pacific. I had absolutely no plans for any other excursions that night, but it was not to be. France beckoned. One of my companions ventured forth and made an awesome discovery: a flourless chocolate brownie topped with crème brûlée. Mae was right: too much of a good thing is wonderful.

Apparently the powers at Jax have as tough a time with numbers as they do with colors: seven nights in a week but only four blue plate specials. No matter. They have all the important stuff right. I'll be back. It's on my route.
Posted by Atworth at 7:05 PM

It was great seeing you during your last visit. Next time you're out, we must visit "The Kitchen" - one of my favorite restaurants in Boulder. See you soon.
-Phil

"The Kitchen" and "Phil's Kitchen" both. I'm looking forward to it!