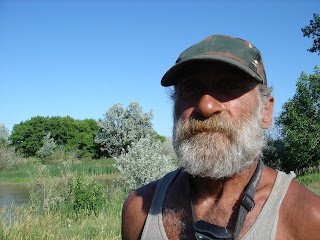 Matt climbed into the Hertz Subaru Outback outside Hot Springs, South Dakota. He was on his way to New Mexico via the Four Corners and Grand Canyon. Originally from Galesburg, Illinois, he has worked as a day laborer and made his home in Texas, Florida or on the road. When I met him, he was seeing "a bit of the country."

If he still had his scooter, I would not have met him. It was impounded in Florida. Matt was passionate about scooters. He could get over 100 miles per gallon. He had traveled from Texas to Illinois on about six gallons of gas. He could carry his pack on the running board. He had nothing good to say about the police, especially the police in Louisiana. They harassed him and confiscated his scooters; his driver's license too. He was on his way to New Mexico because he had heard it was easy to get a new license there.

Matt's backpack was stretched drum tight. He claimed it weighed 100 pounds. Having seen the effort required to heft it, I had no reason to doubt that figure. He carried his life in that pack. He had foot long spikes to secure his tent and a hatchet to cut firewood.

He was dressed in shorts, heavy boots and wore a camouflage baseball cap. On the road, he was called Willy for obvious reasons; he even had the ponytail. He was lean and tanned like a Gulf Coast fisherman. He had professional tattoos on his arms and chest and amateur ink on his fingers. He complained that he could no longer hike 20 miles with his pack due to a bad back.

We crossed the North Platte in Bridgeport, Nebraska and stopped at Runza for a late lunch. He remembered having something like a Runza in LA about 20 years ago. It was a calzone. I had wolfed down half my Runza before I noticed how slowly and deliberately he ate. We returned to the bridge over the Platte and I dropped him off; 140 miles closer to the Grand Canyon than he had been a couple hours earlier. He would make camp under the bridge.