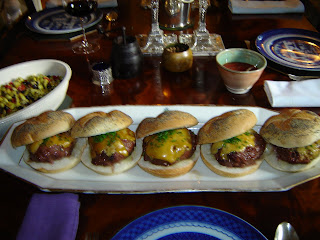 "Don't knead the meat!" As a kid, I thought the key to making hamburgers was in the formation. I was on the right track but headed in the wrong direction. I was working the patties into pucks. Great burgers, I learned, start with lightly formed patties using exactly as much pressure as needed for the ground beef to stick together, and not an ounce more. Grind some pepper and sprinkle some flakey salt over them and you are ready for the grill. Extra effort loses points.

The fire is every bit as important as the beef. Wood, not charcoal, is best. I have used maple, oak, beech, hickory, cherry, even buckthorn; stick to one species, the harder, the better. Build a fire to one side of the grill (I like the classic Weber kettle) and let it burn down to a short but active flame. Make sure the grid surface is clean and very hot before you start cooking. Arrange the burgers on the opposite side of the grill, away from the flame. Replace the cover with the vents open (I usually leave the lid slightly off center to increase the draft). Flip the burgers when the grid leaves a clear sear mark. (In her book, Cookwise, Shirley Corriher explains how protein sticks to the surface until it is cooked and then it releases--keep this in mind: if the burgers are sticking, they probably need more time.) Add cheese (recently I have been using triangles of Vintage Gouda and Emmental instead of a single square slice) and replace the cover. Once the cheese has melted, the burgers are just about ready. Rather than a slice of onion, try blanketing the burgers with chives.
Posted by Atworth at 6:47 PM